When Tamas Dombos heard that the Hungarian Parliament passed a series of laws on Dec. 15 effectively barring same-sex couples from adopting and making LGBTQI school education programs impossible, he was not surprised. “This is all part of a crusade against LGBTQI people,” he says. The new law, which called “the family as the basis of the survival of the nation” and includes the language “the mother is a woman, the father is a man,” has been condemned by rights activists, including the LGBTQI organization Hatter Society, where Dombos is a staff member. Dombos says over the past year and a half, a growing number of Hungarian government officials and politicians have used hate speech against the community and enforced legislation that infringes on the rights of transgender people in particular. “Unfortunately, the picture is very, very gloomy.”

Over the last two years, activists and experts have observed a rising backlash against LGBTQ rights and women’s rights in parts of central and Eastern Europe. They say that the Trump Administration emboldened this backlash and likely contributed to authoritarian leaders doubling down on attacks on women and the LGBTQ community. “The U.S. had traditionally always been seen as an ally in fighting for LGBTI rights, for women’s rights, for human rights, and suddenly, this wasn’t really the case anymore,” says Terry Reintke, a Member of the European Parliament and the co-president of the parliament’s Intergroup on LGBT Rights. Reintke, like other experts and activists, has high expectations of the incoming Joe Biden-Kamala Harris Administration: “Now there is actually a sane partner again sitting in the White House that we can work with on these important issues.”

For Ukrainian activist Olena Shevchenko, women’s rights and LGBTQI rights have become the first targets for conservative and ultra-right attacks over the past four years. “We are challenging different norms on different levels, and they see us LGBT feminists as ‘the new Marxists’,” she says. Earlier this year, Shevchenko and other activists organized a petition signed by 25,000 people calling for the ratification of the Istanbul Convention against violence against women and domestic violence, but they are still waiting for a vote on it in parliament. Even then, Shevchenko is unsure whether the motion will pass, as she says there is a great deal of opposition to these issues from the Church and “pro-family” organizations with close connections to Hungary and Poland.

The role of the Trump Administration

Activists say these right-wing agendas have come to the forefront while President Donald Trump led the U.S.. They say religious right and conservative groups have not only been able to operate without condemnation from the U.S. president, but have been empowered by senior Administration officials to do so. “Those ties had always been there from the Republican party, but during the Trump Administration, they were legitimized and it became an official position,” says Shevchenko.

In Hungary and Poland, experts say populist leaders have targeted the LGBTI community and women as part of broader attacks on human rights and democracy. “LGBTI activists are seen as the frontline democracy defenders at the moment,” says Rémy Bonny, a political scientist and consultant on LGBTI issues based in Brussels. In May, Hungary passed a law making it impossible for transgender people to legally change gender in May, and a children’s book including LGBTQ characters published in October sparked furious backlash from politicians. In Poland, several towns and cities that declared themselves “LGBT-free zones” were denied E.U. funding in July, LGBTQ activists faced police aggression in protests dubbed #PolishStonewall in August, and mass protests swept the country for several weeks towards the end of the year demonstrating against a near-total ban on abortion. 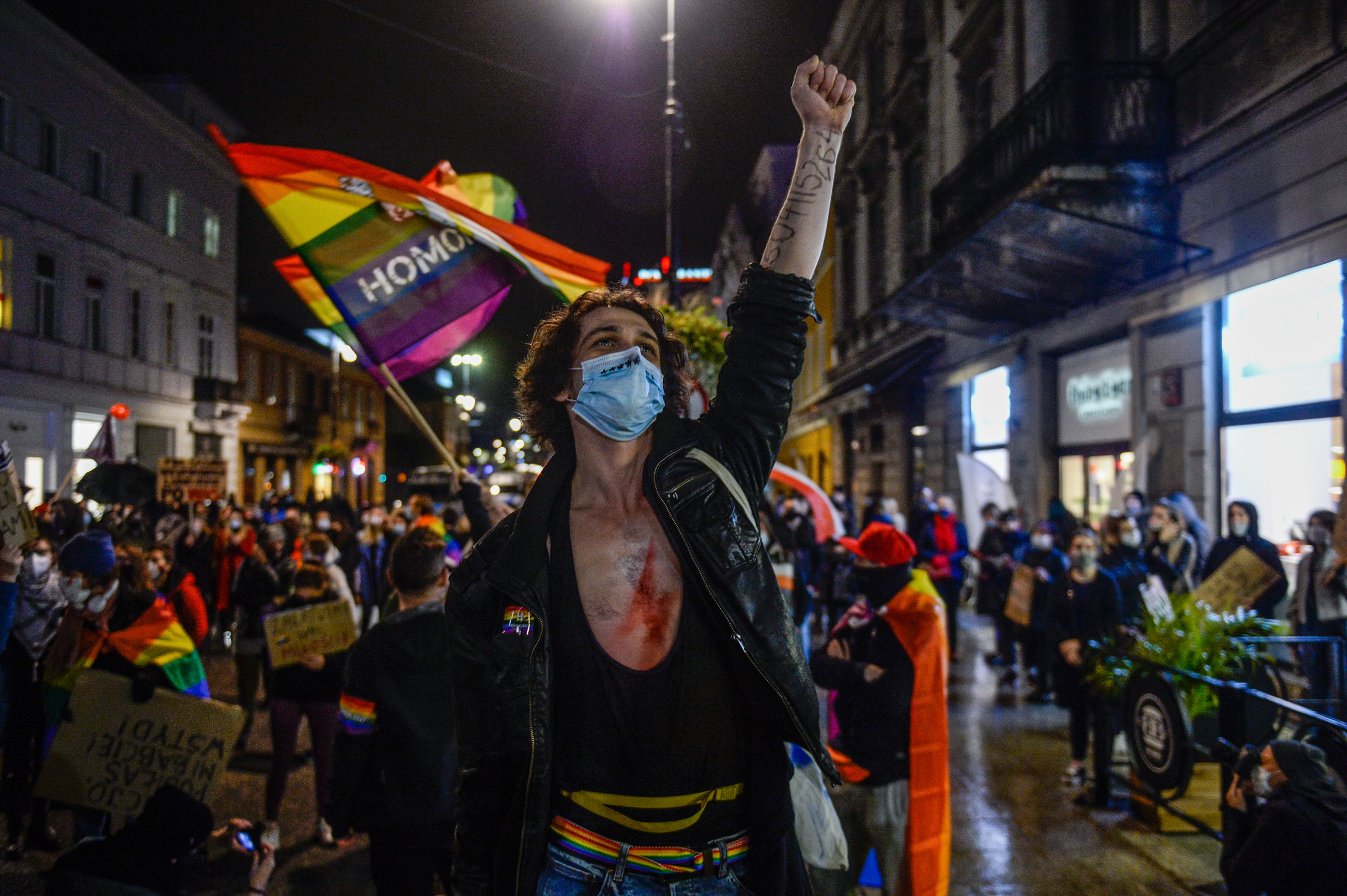 A man with the symbol of the women’s strike painted on his chest shouts slogans as he continues to protest against the Constitutional Court ruling on tightening the abortion law in Warsaw on Oct. 29, 2020.

During the protests against that proposed abortion ban, Secretary of State Mike Pompeo co-hosted a virtual event with Poland’s Ministry of Foreign Affairs, known as the Ministerial to Advance Religious Freedom. While the purported goal of such meetings is to address religious persecution, monitoring groups say that U.S. representatives and organizations’ real goal is more sinister. “The Trump Administration has attacked abortion rights, LGBTQ rights, other human rights at every turn, and has also really laid the groundwork for U.S. based hate groups to employ global policy well beyond when the Trump administration actually leaves the White House,” says Molly Bangs, director at Equity Forward, a U.S. based watchdog organization focusing on reproductive health and rights that formed shortly after Trump came into office. Last year, senior Administration officials attended an event at the Hungarian Embassy titled “Make Families Great Again,” promoting Orban’s “Family Protection Action Plan,” which emphasizes “family values” and encourages women to have children.

Pompeo was also the architect of the Geneva Consensus Declaration, a statement signed by 35 largely illiberal or authoritarian governments, among them Hungary, Poland, Brazil and Saudi Arabia. One of the first actions Trump took when he came to office in January 2017 was to reinstate and expand a Reagan-era policy known as the “Global Gag Rule”, which prohibits the granting of American foreign aid to international NGOs that offer abortion services, provide information about abortion, and even those who offer healthcare services unrelated to abortion or family planning. In the absence of American leadership, Reintke says that some countries in the European Union “woke up and realized that they have a responsibility on a global scale.” Her group within the European Parliament helped push for the proposals outlined in the European Commission’s first-ever LGBTIQ strategy, which was announced in November.

In the last four years, Christian right groups, including the Alliance Defending Freedom, International Christian Concern, and the American Center for Law and Justice, have reportedly deepened their roots and networks in Europe. A recent investigation by openDemocracy found that more than two dozen such U.S. organizations poured millions into pursuing conservative agendas threatening women’s rights and LGBTQ rights across Europe, including pursuing legal battles to oppose same-sex adoption, defend legislation against same-sex couples and restrict access to contraception and abortion. “We’ve seen that these ultra-conservative organisations, like the International Organization for the Family, have become much more confident and that they feel encouraged by the Trump administration,” says Bonny.

Many are now hopeful for the incoming Biden Administration, given the former Vice-President’s early support for same-sex marriage during the Obama years, and his belief in the role of American leadership on human rights issues. According to Bonny, it will be much more difficult for the Polish government in particular to continue treading the same path, given Warsaw has few international allies and is on thin ice in Brussels because of rhetoric and policies targeting minority communities. “It’s pretty obvious that Biden is not going to tolerate any anti-LGBT rhetoric,” he says, pointing to the President-elect’s tweet condemning Poland’s “LGBT-free zones” during the campaign season in September. “With the election of Biden, the anti-women and anti-LGBT rhetoric coming from the Polish government is basically diplomatic suicide.”

In Hungary, Bonny predicts the situation may be slightly different, due to the country’s closer ties with Russia, where a hostile culture towards LGBTQ people is reinforced by repressive government legislation, including a notorious “gay propaganda” law that effectively bans access to LGBTQ-inclusive education and support services for children, under the guise of promoting and protecting “traditional family values.” Dombos, who is based in Budapest, hopes that Biden’s Secretary of State nominee Anthony Blinken—who favors global alliances instead of Trump’s “America First” brand of foreign policy—might pay close attention to the human rights transgressions in the country given his own Hungarian roots.“The rights of LGBTQ people and minorities are not a political debate, it’s a basic human rights issue and and that’s how it should be treated,” he says. 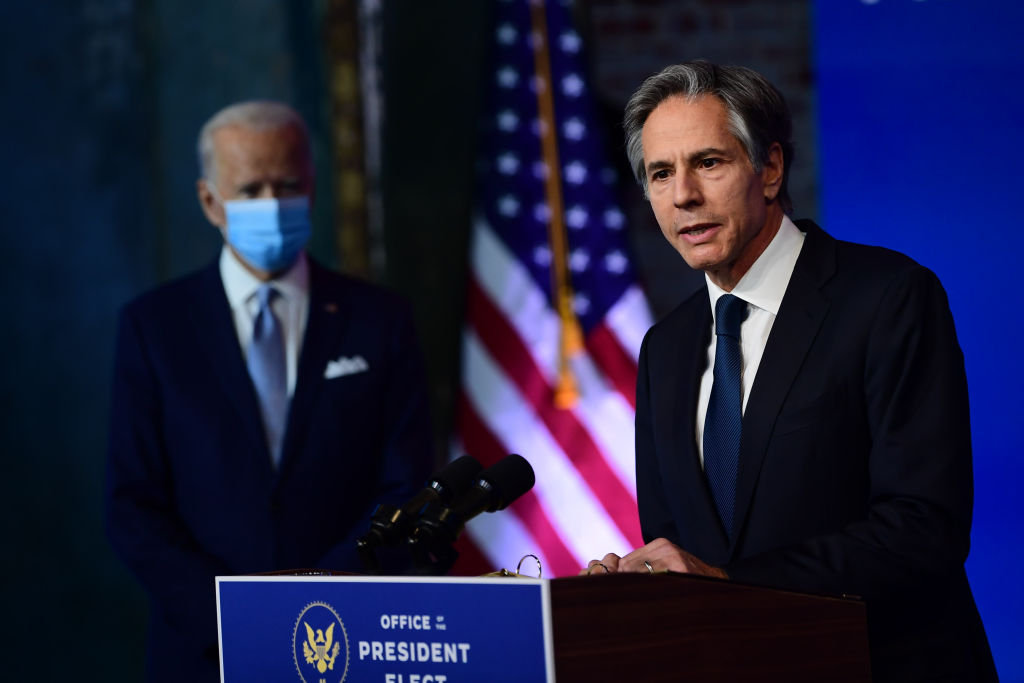 Secretary of State nominee Antony Blinken speaks after being introduced by President-elect Joe Biden as he introduces key foreign policy and national security nominees and appointments at the Queen Theatre on November 24, 2020 in Wilmington, Delaware.

Other early nominees have given activists cause for optimism. Linda Greenfield-Thomas, who has been tapped to represent the U.S. at the United Nations, is an experienced diplomat who served as U.S. ambassador to Liberia and as Assistant Secretary of State for African Affairs during the Obama administration. During her tenure in these roles, Greenfield-Thomas voiced her support for LGBTQ rights, and discussed gay rights with Liberia’s President Ellen Johnson Sirleaf during a time of rising tensions on the issue after Secretary of State Hillary Clinton announced the U.S.’s first government-wide policy to push for the decriminalization of homosexuality overseas.

And on Dec. 15, Biden picked former Democratic nominee rival Pete Buttigieg as his transportation secretary, which would make him the first openly gay person in U.S. history to be confirmed by the Senate to a Cabinet post. For observers in Europe, that selection sends a strong message. “Of course, I am happy an LGBTQ-person has been put in a position as important as transportation,” says Bonny. “But I do hope more LGBTQ-people will be put in positions in the foreign service, especially in those countries LGBTQ-rights are under threat.”

Repairing the damage to America’s international reputation as a leader on human rights issues, and particularly LGBTQ rights and women’s rights, will not be an overnight task. For lawmaker Reintke, reinforcing the partnership between Europe and the U.S. and focusing on human rights, democracy and the rule of law together is the way forward. “I hope that Joe Biden and Kamala Harris understand that the European Union is not only an economic bloc, but also a community of values,” she says. “I hope that there’s going to be very close co-operation between the U.S. and the E.U. to really support civil society and LGBTI activists across the world, because in the end, they are the ones that can actually change societies and can make equality a reality.”

Get The Brief. Sign up to receive the top stories you need to know right now.