When Russian poet Galina Rymbu saw images from online flash mobs protesting the arrest of LGBT feminist activist Yulia Tsvetkova in June, she knew she had to add her voice in support. Tsvetkova is based in the Khabarovsk region in the far-east of Russia and has been fined multiple times under Russia’s “gay propaganda” law. The 27-year-old is currently facing charges for “spreading pornography” and up to six years in prison for her work—which includes running a feminist blog featuring illustrations of vaginas, aimed at reducing stigma around the female body and menstruation. Inspired by her case, Rymbu wrote a poem titled “My Vagina”.

“I wanted to create a poetic and political portrait of my vagina,” Rymbu, 30, says via video call from her home in Lviv, Ukraine. After Rymbu posted “My Vagina” to her Facebook page in late June, the poem was shared hundreds of times and calls for Tsvetkova’s release grew. “For me, poetry is a form of politics and of protest,” Rymbu says. “I believe that poetry, and language more broadly, is capable today of changing the world politically.”

For artists like Rymbu, that change is much needed. Russia’s political climate has become increasingly hostile to human rights activists—Tsvetkova’s detention was another example of the state targeting high-profile activists and confining them to house arrest. Under Russian President Vladimir Putin, there has also been a wave of legislation targeting women and LGBTQ people, from the decriminalization of domestic violence in 2017, to the country’s notorious gay propaganda law, to constitutional changes in July that define marriage as a union between a man and a woman. Rymbu says these actions by the state in part sparked the rise of the current feminist and LGBTQ rights movement in Russia.

Rymbu is part of a new generation of Russian poets taking up language as a form of political protest, challenging state, societal and patriarchal norms with poetry that draws from personal experience. F pis’mo, or F Writing, a collective of feminist and LGBTQ poets formed in 2017 with members intertwining activism with art to galvanize support for civil rights movements in Russia. The collective began with a writing workshop in January of that year, when Rymbu and other feminist writers, long-frustrated by being overlooked by mainstream Russian media and literature, began meeting in her kitchen at her former home in Saint Petersburg. Gradually, the meetings moved into different spaces like art galleries and bookstores, and in November 2018, F pis’mo started the first ever Russian magazine and online platform dedicated to queer and feminist writing. “We decided to become a group and create a platform to show there are many of us, and to make our work accessible,” Rymbu says. Similar groups have since formed in other Russian cities, including Moscow and Yekaterinburg. In a new poetry anthology called F Letter: New Russian Feminist Poetry, F pis’mo have created their own space, translating the work of several of the collective’s poets into English for the first time. Work by Rymbu and another poet in the F Letter anthology, Lida Yusupova, has also been translated into English in new separate bilingual publications; Rymbu’s Life in Space collection was published in November, and Yusupova’s The Scar We Know will be publishing in February 2021.

Eugene Ostashevsky, a poet, translator and a professor at New York University based in Berlin, who works closely with Rymbu on translations and co-edited the F Letter anthology, calls her a “completely new, virtuoso voice.” He says that historically, Russian poets have been concerned with sound, language and technique, whereas the more modern free verse, stream of consciousness style of writing that this younger generation of poets use loosens those rigid structures and points to new ways of thinking and speaking. “This is what allows this poetry to be political. It’s the self speaking as a citizen,” Ostashevsky says. “[Rymbu] says, in a very clear way and translucent way, incredibly important things that people have not been able to say.” And at a time when activists say the state in Russia has been pushing back on bodily autonomy and the basic human rights of women and LGBTQ communities, speaking to those personal experiences is a form of subversion against the regime.

It’s not just the younger generation doing more experimental work, though. 57-year-old Yusupova’s work was among the first in contemporary Russian poetry to directly approach the theme of sexual violence, and has inspired many of the younger poets within the collective. Several of F pis’mo‘s community of poets were born after 1989, the year the Berlin Wall fell, and the wave of revolutions grew across the Soviet Union that eventually led to the end of Communist rule in central and eastern Europe. Their coming of age in the post-Soviet period has meant their approach to themes like the body, sexual violence and LGBTQ identities is radically different, reflecting changing attitudes to what can both be said and written in public, especially by women. “Freedom of speech was tremendously restrained and was tremendously limited in the Soviet Union, and also so was private life,” says Rymbu. 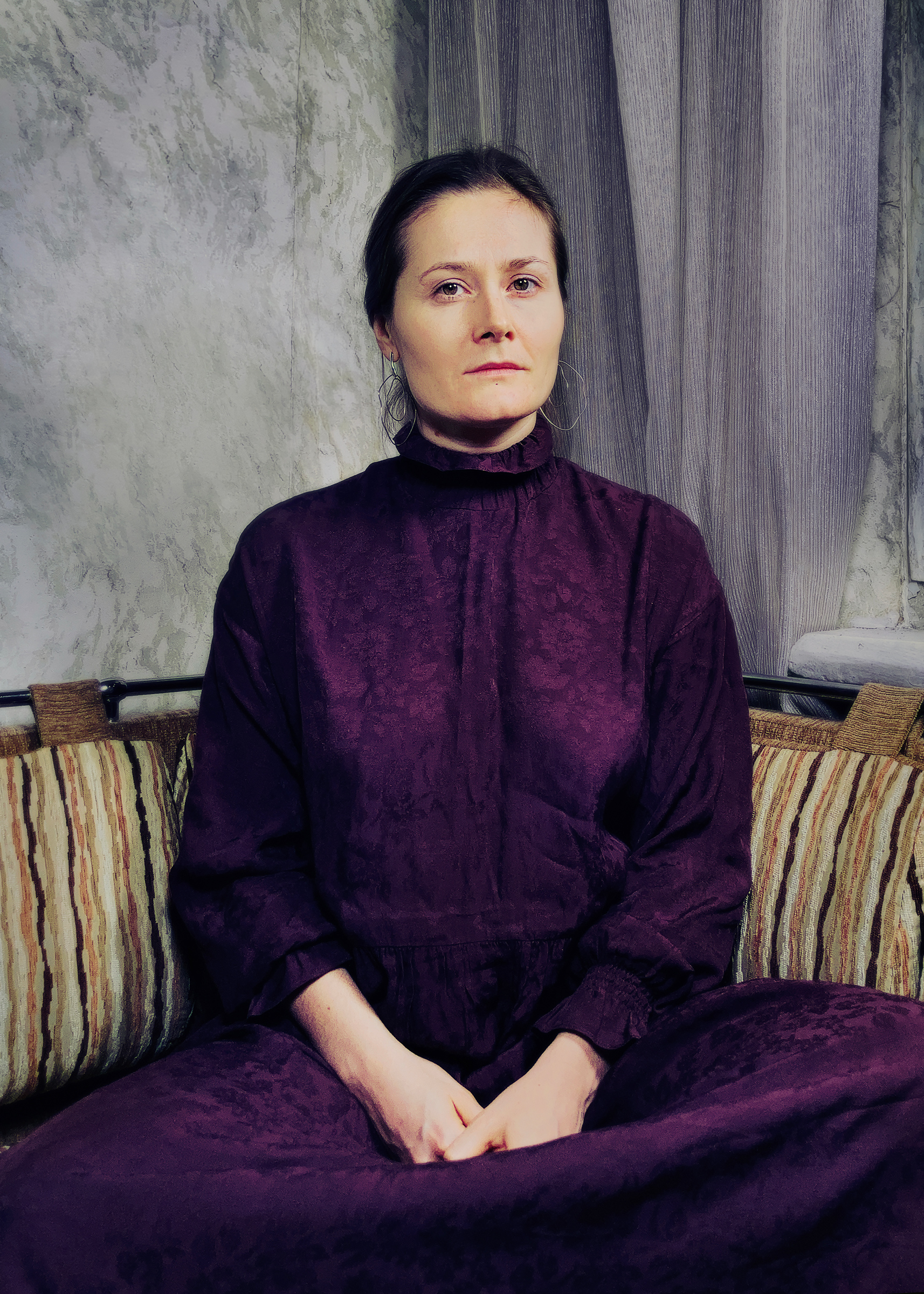 Oksana Vasyakina, photographed during a remote portrait session in December.

Growing up in a remote area in Siberia, Oksana Vasyakina was struck by the dearth of characters within Russian poetry that represented her lived reality, and that of the women in her family. She wrote her first poem at the age of 14. “From an early age, I was aware of gender norms and I wanted to criticize them,” she says, speaking through translator and Russian language professor Ainsley Morse, who co-edited the F Letter anthology. “I wanted to bring this chunk of my reality into my poetry. That’s how I became a feminist.”

At the end of 2016, she wrote an avant-garde poem called “Wind of Fury,” an epic, lyrical meditation on female rage and gender-based violence. Inspired by the harsh natural environment of Vasyainka’s hometown, “Wind of Fury” imagines women seeking revenge and rising up from underground. Vasyakina decided to print out 3,000 copies of the poem on her home printer and then distributed them herself to women in Moscow. She also received requests via Russian social media platform Vkontakte, and sent copies to Russian provinces, Ukraine and Belarus. The act of self-publishing her work was reminiscent of samizdat literature, where dissidents published makeshift literature and circulated it in secret during the Soviet era. “It was definitely an explicitly activist gesture, but then it was later picked up by the biggest publisher in Russia,” she says, laughing. “It was like, Hello capitalism!” Vasyakina went on to win the prestigious Lyceum prize for young Russian authors in 2019. Based in Moscow, the 31-year-old now runs a creative writing studio, and organizes meetings and poetry readings in support of activists like Tsvetkova and the Kachaturian sisters, three teenage sisters currently facing trial for killing their father in Moscow after he had psychologically and physically abused them for several years. “I think of poetry as a lamp illuminating areas that have not been illuminated before, areas of experience and language,” she says.

The case of the Khachaturian sisters also inspired the work of Egana Djabbarova, 28, whose contribution to F Letter is almost like a prayer to their struggles, drawing on Sufi poetry traditions and personal history. “I am a lesbian, feminist woman from a Muslim family where I had strict rules about how I should behave, what I should wear, how I should talk,” says Djabbarova. Her writing is also for the women of her family, who she says feel similarly about their constraints but are unable to speak up against patriarchal norms. Poet Elena Kostyleva, whose work references the treatment of LGBTQ people in Chechnya, also crafted a personal letter addressed to a friend living near the Chechnya caucasus, rather than an overtly political statement. But expressing such personal experiences through art is a form of freedom and resistance for the poets. Both women say that the cultural and activist landscape over the last five years has made it possible for such writing to exist and be well received. “For the first time in many years, women are not afraid to talk about themselves, to make other people see them, their problems, their bodies, everything,” Djabbarova says.

While activism may have changed over the last five years in Russia, Rymbu says she’s seen little difference in the Putin regime, which has grown increasingly authoritarian, nor in society at large. Reported incidents of domestic violence in the country have numbered in the thousands for several years, and jumped from 6,000 in March this year to more than 13,000 in April after the Kremlin imposed a nationwide lockdown due to the coronavirus pandemic, according to Russia’s human rights commissioner— although the real figure is likely higher due to underreporting. The government restricts women from doing certain jobs, and women have little representation in law-making roles. In early July, a referendum result approved changes to the constitution that allow Putin to stay in power in Russia until 2036—a move decried by democracy activists and critics.

The political environment partially contributed to Rymbu’s move to Lviv in Ukraine in fall 2018—a move she had been considering for some time, as she felt concerned for her safety and that of her son. “Right now in Russia, it’s a roulette,” she says, speaking about the persecution of feminist and political activists. “You could always be the next one.” She went to Lviv because she has Ukrainian roots and it was also the hometown of her partner. But she also noticed a raising of public consciousness in Ukraine that made her feel optimistic, like the capital Kyiv’s Gay Pride festival, which went ahead largely unimpeded last year, although the LGBTQ community still faces violence and resistance from far-right and religious groups respectively. While she is no longer physically in Russia, Rymbu is still active in cultural politics there. “I see people who continue resisting it. And I believe that there will come a time when these people will change the country,” she says.

These people are within F pis’mo too, using poetry as protest beyond the printed word. One of the authors in the anthology, artist Daria Serenko, launched a personal protest called #quietpicket in 2016, where she went about her day travelling around Moscow wearing placards with messages about LGBT issues and political prisoners, speaking to strangers around her about the content of the sign. Often these signs would have poems, rather than direct political slogans. “For me, this is one of the best examples of both feminist poetics and feminist politics,” says Rymbu. In early October, police questioned Serenko about her involvement in a conference about protesting, which the authorities also raided.

Rymbu hopes the poetry included in F Letter, which is now available to purchase online, and her own forthcoming collection Life in Space, will create “radical empathy” and help people facing oppression around the world join together in solidarity. She is now planning to run a trilingual project of feminist poetry in Russian, Ukrainian and Belarusian, given the response to F pis’mo’s work across all three countries. “For me, poetry is dialogue,” she says. “I would like to see the books become dialogues, or multilogues for their readers, and to inspire more conversation with the world.”

Get The Brief. Sign up to receive the top stories you need to know right now.